Well it was a big night of “openings” this past Saturday and our first stop was the new 5733 Retail Clothing Store & Gallery on Piedmont Ave (this before heading to the Oakland Museum Opening party, but more on that tomorrow…) 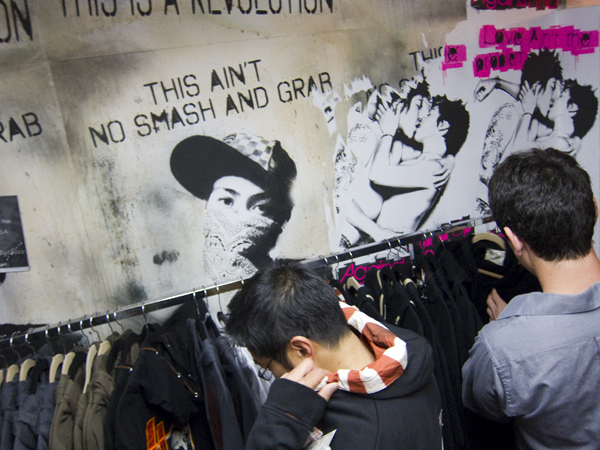 We weren’t sure exactly where the store was, but as we approached the correct block, the bumpin’ beats led us straight to the party. Tucked into an alcove off the main avenue, and up a flight of stairs, folks might know this location from the next door neighbor Chez Simone, who serves up delectable french cuisine as though you’re a guest in her own home.

Despite the early hour, the party was already in full swing… the place packed and thronged with photographers. It was anything you could do not to get smacked in the face by a huge zoom lens. Others twittered away on their blackberries… and of course, people shopped. A steady buzz broadcast from the direction of the cash register, and with all goods produced locally & sustainably AND marked 25% off, the temptation was hard to resist. What can I say? I love my new hoodie!

Above, a display of some of artist Eddie Colla’s T-shirt designs… the far right was particularly memorable, titled X’s. Stitched onto the shirt were various fabric reproductions of polaroid snaps of gorgeous lingerie-clad girls in compromising positions… handwritten notes were scrawled on each one, like “Jiao – Bad English, but we were both fluent in Smirnoff.” 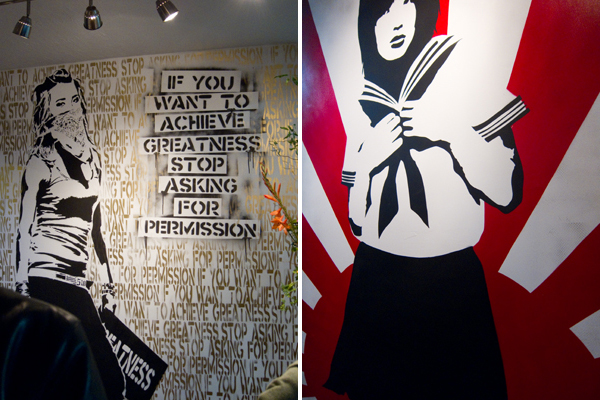 The murals above and below were my favorites… especially the “If you want to achieve greatness….” piece, from which I titled this post. It’s a bold sentiment embraced whole-heartedly by artist and founder Eddie Colla. As a street artist whose works are more typically found on abandoned buildings and back alleyways, the whole point is to create without authorization.

“There is a visual conversation that takes place on the streets of urban environments. This conversation is dominated primarily by advertising and utilitarian signage and assumes  passive participation. Whether invited or not I am going to participate in this conversation. Public spaces were never intended to be coated from top to bottom with photos of consumer products. These spaces should, in some manner, reflect the culture that thrives in that space.”

Hence, the concealed identity through use of bandanas… I love how this is mimicked in other pieces through the use of asian characters wearing masks (but for entirely different reasons).

Don’t fret if you missed the opening party… After the success of this one, they’re sure to have plenty of future events. You can visit the store at 4125 Piedmont Ave, Oakland.