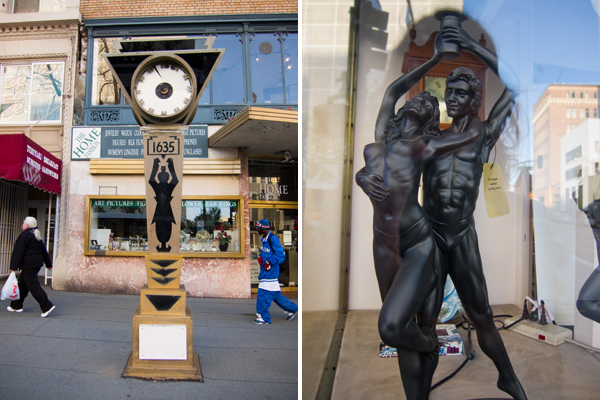 It’s design is unusual because although the base is rectangular, the tower and clock itself is pyramidal, with only three sides. According to Bill Sturm, who runs the history room of the Oakland Library, street clocks used to be common in Oakland, erected by jewelry stores as advertising. Most of them are gone now, and Sturm says this is the oldest one in the city, hands down.

Commissioned in 1930 by the Davidson and Licht Jewelry Co. and originally installed at 1318 Broadway, this clock was uprooted twice when the jewelry store moved and has been at its current location since 1947. Interestingly enough, though no longer functional – it was damaged by a car sometime in the 1980’s – it still marks the location of a store that sells jewelry, among other things.

1635 Broadway is now occupied by The Home Fashion store. You can see their sign in the background which touts everything from “jewelry, watches, clocks, art pictures, figures, silk flowers, lamps, phones, women’s lingerie, and sunglasses.” Lingerie… really?!? That’s quite an assortment of stuff.

I spotted the lamp (above right) in their store window… Its tag reads “the unique and best lighting source.” All I can say is… WOW.

3 thoughts on “Past & Present”