More than 40 years after Anne Moody’s autobiography Coming of Age in Mississippi was published, I am amazed to see how far we still have to go in terms of race relations in America. Her book – an intimate portrait of the inequities and violence experienced as a poor, young, southern African American in rural Mississippi and her ultimate involvement in the civil rights movement – ends as she and fellow civil rights advocates ride a bus on their way to Washington D.C.

As riders sing the civil rights anthem “We Shall Overcome,” her fellow rider notices that she is not singing along. He asks, “Moody, we’re gonna git things straight in Washington, huh?” She doesn’t answer but only thinks to herself… I WONDER. I really WONDER.

And 4 decades later I find myself wondering, how is it that in some respects we’ve come so far, while in others we continue to fail so miserably?

As someone who loves the city of Oakland and the amazing state of California (I moved here from the East Coast as a young adult and have never once considered moving back), I was disheartened to see the events that transpired last night. What started off as a largely positive and peaceful protest, orchestrated by local government leaders, non-profits, clergy, citizens, and the like, was ultimately hijacked by a few, clearly hell-bent on destruction despite everyone’s pleas for peace (including the family of Oscar Grant).

I believe it will become clear as the details of these arrests come out, that the majority of these folks are not from Oakland. And the acts they commit, supposedly in the name of justice, are nothing more than senseless vandalism, theft, and destruction. They do not contribute in any way, shape, or form to the promotion of justice.

In fact, some of these horrible acts were committed by perpetrators wearing Oscar Grant masks. How f&*(ing ridiculous is that? As if it hasn’t been painful enough for the family members of Grant, to now have to witness these acts being performed by actors assuming his likeness. It’s the stupidest. StupidEST!

The photos below (borrowed from Oakland Tribune with photo credits and links to original articles) portray this idiocy. 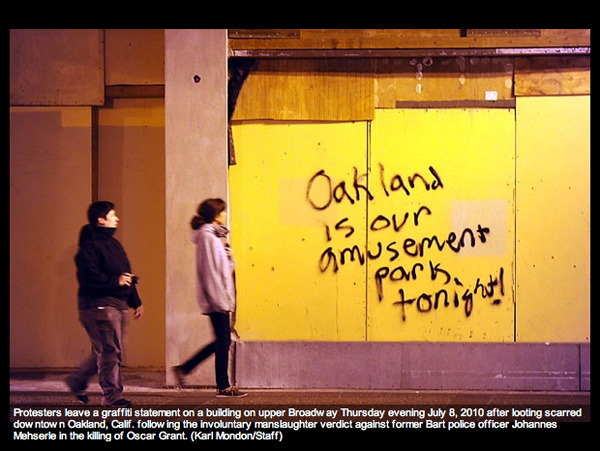 This is AMUSEMENT?!? This is not a game people. This is a real community. Blacks, Whites, Browns, Reds, Yellows, hell, Purples, and Greens. WE ALL LIVE HERE!

Please tell me how stealing shoes from local business owners promotes justice. Anyone?!?

In my opinion, these acts only hurt the cause because they continue to reinforce negative stereotypes. If the shoe fits… 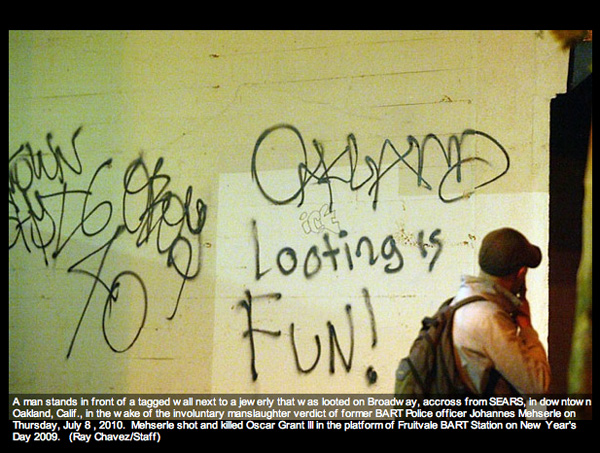 FUN??? Again, I’m confounded. Is this about justice or is this about getting your rocks off? 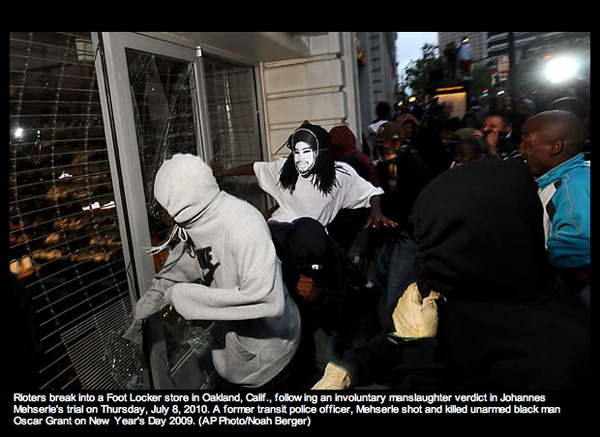 This weekend marks the 50th anniversary of Harper Lee’s To Kill a Mockingbird, another classic of American Literature devoted to the theme of racial injustice, among others. As the media has highlighted various events going on this week in honor of the anniversary, I couldn’t help but think about the parallels with our current day events…

In To Kill A Mockingbird, a black man is charged with the crime of rape against a white woman. Despite his innocence, he is found guilty by the jury. An unjust verdict.

In the Mehserle trial, a white police officer is charged with the murder of a young, unarmed, black man. Despite the fact that his actions clearly resulted in the death of Grant, he was convicted of only “involuntary” manslaughter, meaning there was no intent.

The trials are very different to be sure, but both involve racially charged situations in which an unjust verdict was reached (or at least what many deem to be unjust, in the current case).

I, for one, plan to re-read To Kill A Mockingbird this weekend in honor of the anniversary, and in light of recent events. Its lessons remind us to treat each other with respect and compassion. To realize “you never really understand a person until you consider things from his point of view — until you climb around in his skin and walk around in it.”

9 thoughts on “Coming of Age in California…”