So you knew I had to follow the giraffes with the zebras right?  Same artist… Dan Fontes.

These were originally produced in 1985 thanks to a public commission by the Oakland Office of Community Development.  Last updated in 2003, looks like they could use a new freshening as they’ve suffered some weathering and graffiti vandalism.  (Located under 580 freeway overpass on Broadway) 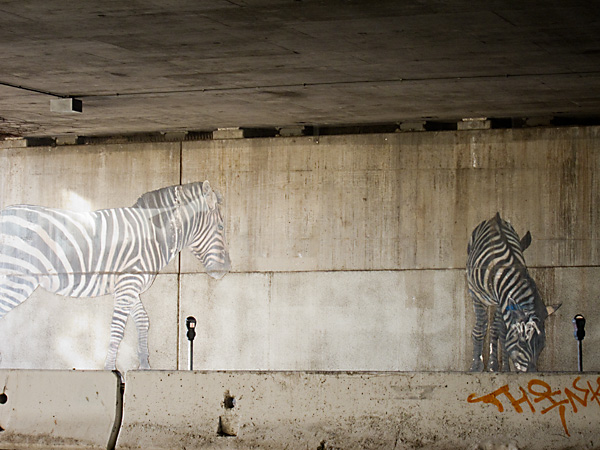 Fontes is a local artist and has produced numerous murals throughout the Bay Area. If curious, you can type his name into the search field at the top right of this page to see the ones I’ve covered so far. I’m curious to know if anyone ever uses that feature… it actually works pretty well.

One of a series of murals featured under various 580 freeway exits in East Oakland. My favorite of the series (Park Blvd exit) was featured awhile back… Invisible Colors.

There are four in total from a project titled Words by Roads which was commissioned through the City of Oakland’s Public Art Program in 1991.

Alavi, who’s known for the use of language in his works, conducted creative workshops with the students “to communicate ideas about the power of language… and the social and cultural nature of public art.”

He saw himself acting merely as a facilitator and credits the ideas and sketches for the murals exclusively to the students. “These students felt racism was the most important issue to comment on and decided on four phrases… to be printed on highly visible locations in their neighborhoods.” (City of Oakland Public Art Program)

You’ll have to check back to see the others…  I’ll have more info on the artist too. 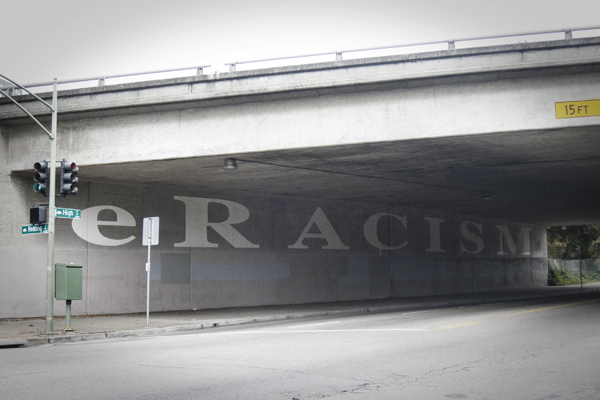