I was in my old hood the other day and passed a fenced in triangle of property at the intersection of 32nd and Union streets. I’ve driven or biked past this spot hundreds of times over the years.

It’s right in front of a couple loft developments, an older converted building called West Clawson Lofts (the building once housed the Clawson Elementary School ) and a newer development called Magnolia Row, built from scratch on the neighboring empty lots in the early 2000’s.

There once was a community garden installed in the small lot. I thought it was wonderful. I never knew who installed it there, but it existed for a year, maybe more, and consisted of raised vegetable beds surrounded by more ornamental flowering plants. One of the cool features was the reuse of old bicycle wheels (without the tires) along the chain link fence. They were used as trellising to encourage climbing plants (like morning glory) to obscure the ugly fence. I thought it was a lovely addition to the neighborhood.

But soon after it was established it was removed. My information is only hearsay so I can’t verify its validity, but someone told me that there was a dispute over the ownership of the lot and that, apparently, the rightful owner was intent upon installing a coffee stand/shop there.

I thought, well it’s a shame the garden is gone. But a coffee stand could be cool too.

Years went by, and at one point it seemed promising as a small wood shack was erected inside the fence. But nothing ever followed.

And so for years, we West Oakland neighbors were deprived of our pretty little community garden, and instead, were left with a ramshackle hut inside a weed and litter strewn lot locked inside a chain-link fence. sigh. 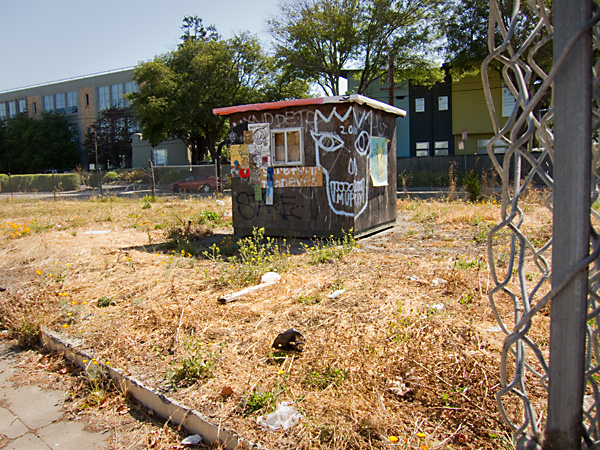 But recently some artists have taken measures to reclaim the lot, repurposing the walls of the hut as outdoor gallery space for their art. It currently houses a number of pieces but it looks like the bulk of it was jointly installed by a number of artists working collaboratively: Ras Terms, Dead Eyes, and Safety First included. I’m not sure about other participants. 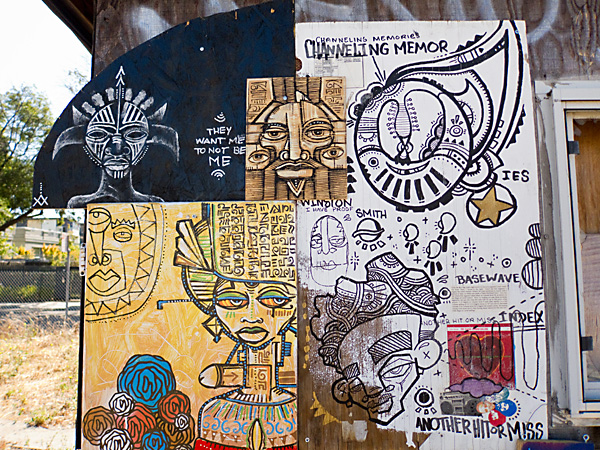 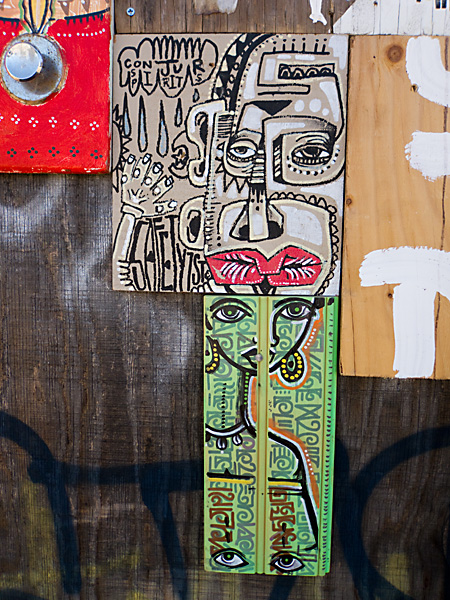 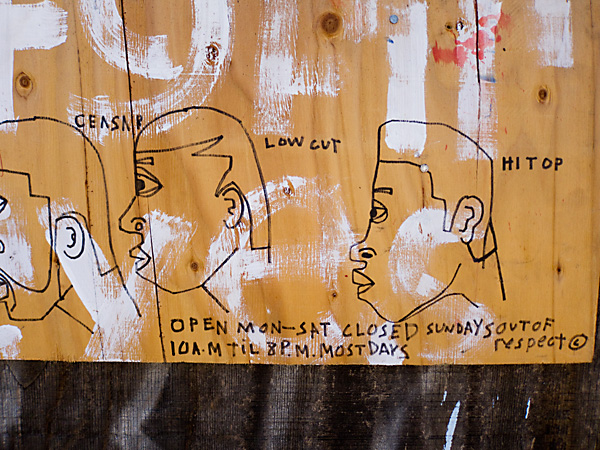 And who knows… maybe one day we could have our garden back too. A peaceful green space to sit and reflect upon the art…

So you may have noticed I didn’t have a whole lot to say last week. In fact, not one small peep. I was actually on vacation and set up the week long set of posts before leaving town. I meant to give a little intro but ran out of time, so I’ll do so now…

The last six posts highlighted a slew of stickers and wheatpastes found on the small retail stretch of Lakeshore Avenue near Lake Merritt. I was amazed at how many I spotted in just a few short minutes, and also the incredible variety of styles.

My favorite was the first one posted “Country First” which was a comic-book styled political satire piece hand-drawn on a USPS sticker. Other original works included a couple classic Koleo’s, and some hand painted and/or stenciled pieces. There were also a few reproduction stickers, and lastly, a funny little piece seemingly produced by a label-making machine, stating only “Spare Me.”

Since I was out of town through the weekend, I missed the big events of Outside Lands and Oakland’s Art & Soul Festival.  I’d be curious to hear details if folks went to these, especially the Oaktownfest.

It’ll probably take me a bit to get back into the swing of things so next few posts may be a bit sporadic, but in the meantime here’s a lovely mural spotted while on vacation.  Trying to hold on to that island vibe for just a bit longer… 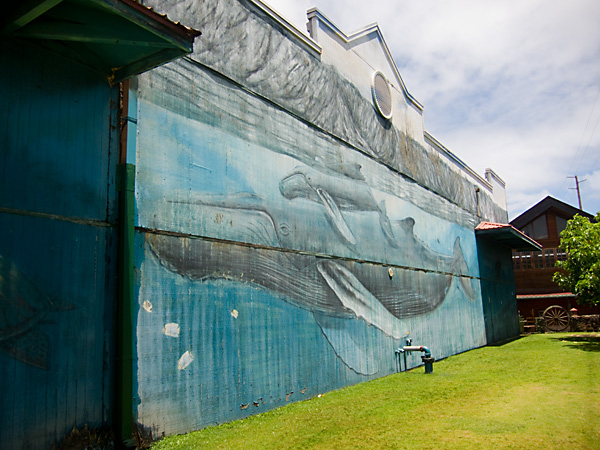 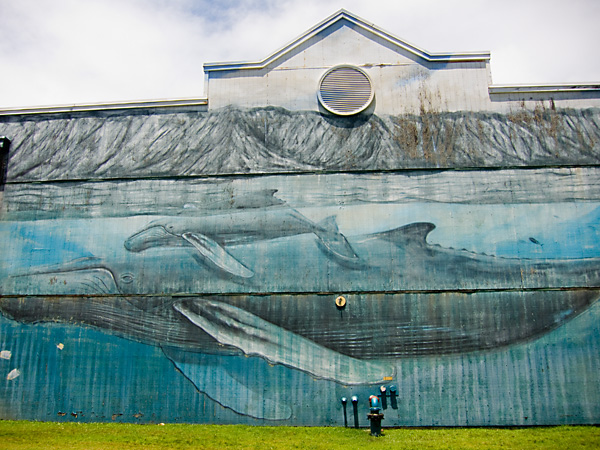 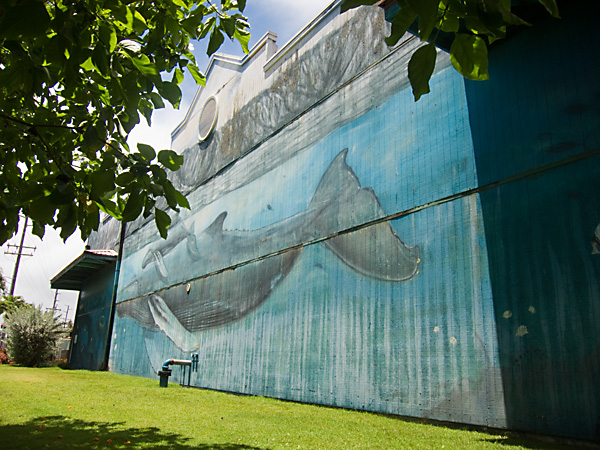 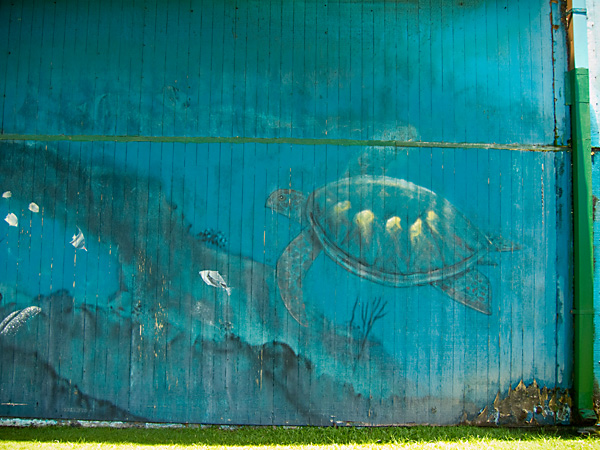 This mural was spotted near the town of Kapa’a on the island of Kaua’i. It was produced by the artist Wyland in 1991 as part of his environmental mission to paint 100 Whaling Walls throughout the world. His goal is to educate and inform the world about the plight of marine life, and all the images he produces are life size and accurate to the last detail of the marine habitat.

Pictured in this mural is a humpback whale and its calf along Kauai’s Na Pali Coast. The whales migrate from their Alaskan summer residences to Hawai’i each fall to birth their calves in the warm Pacific Waters before returning north in the spring.

We didn’t see any whales on this trip as it’s not the right season, but we did see (and swim with!) the beautiful and gentle green sea turtles, also pictured. 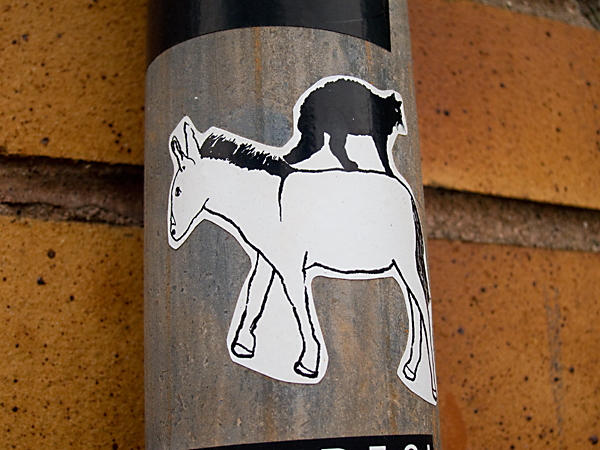 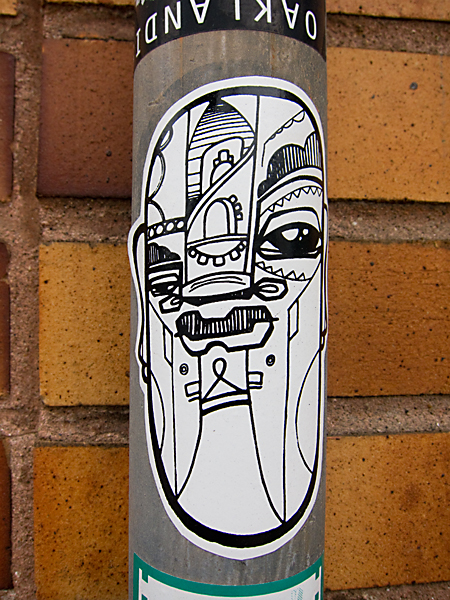 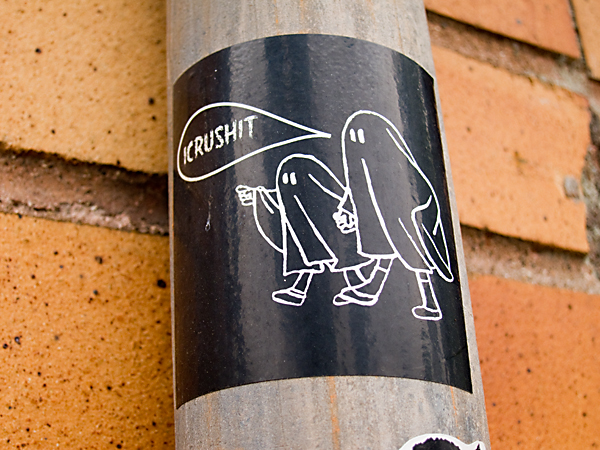 Art Murmur TONITE! See you all there… 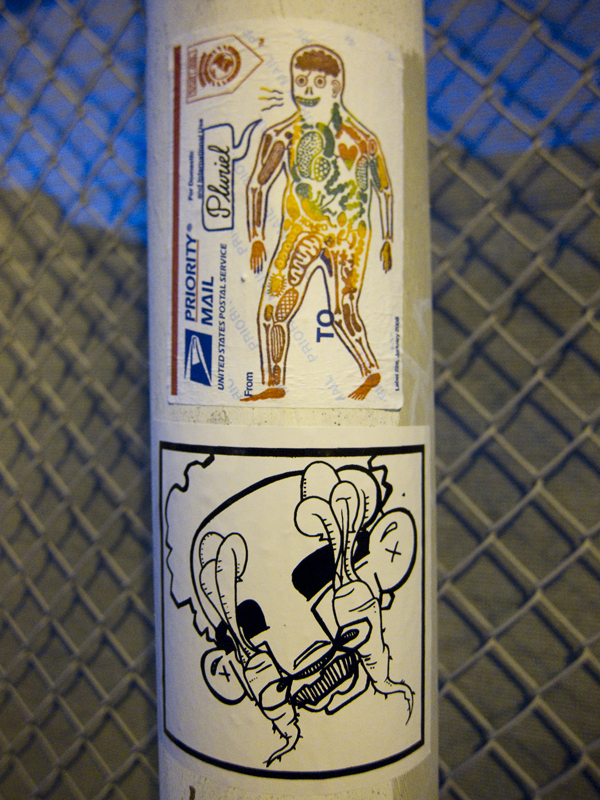