So after nearly two weeks of traveling for the holidays… semi-invasive security scans, crappy airport food at exorbitant prices, too much chocolate (I didn’t think it was possible!), and too little sleep on too small and seriously uncomfortable beds (sorry mom)… we touched down at Oakland airport after making a glorious low swoop over Berkeley, the Bay Bridge, and then San Francisco at dusk, to loop back around and hit the runway from the reverse-of-typical direction.

It was beautiful. The city twinkling amidst its blanket of deep blue. The strand of lights stringing the bridge that stretches from one city to another, hitched at a small island in the sea, and paralleled by the new bridge, slowly but stealthily nearing completion.

And I had the feeling I always have upon returning home after travels, whether they be to frequent destinations or distant exotic places.  I’m so happy to be home.  And I’m so happy my home is here.

It’s interesting to describe Oakland to people who aren’t from here. During the holidays with my family, my brother quoted the statistic that Oakland was the fifth most dangerous city in the country.  Um… thanks Mike! And of course we do have our share of problems. Yes there is violent crime.  And blight. And devastating poverty, among other things.

But we have so much more than the grim facts delivered by sensationalist seeking so-called “news”. Thanks to smart stewardship we have plentiful protected green spaces that provide habitat for wildlife and recreational opportunities for us humans.  We have the best damn weather in the country (I do not miss the 6 month long New England winter!) We have a wealth of diversity of peoples and cultures that, frankly, exists in few other parts of this country.  And this diversity promotes a rich & complex smorgasbord of art and music and food that truly enriches our lives.  I really can’t imagine living anywhere else.

But times are tough these days, and I know our city is facing some serious challenges (as is our state, and our country at large),with the budgetary crises being pre-eminent.  If you listen to the news these days you hear a lot about sacrifice.  The impending “day of reckoning”.  And I’m not speaking religiously here, but rather, fiscally. Funds will be cut from schools, from health and human services, and numerous other places, but mostly from those who need it most.

People get greedy in times of strife.  The economist Benjamin Friedman identified this in his book “The Moral Consequences of Economic Growth,” noting that in times of economic stagnation, voters become more concerned about protecting their own interests, more hostile towards outsiders, and less interested in social welfare. Everyone’s out to protect their own. But unfortunately, this mentality fails to recognize the obvious truth (and I wish I knew who to attribute this quote to but I don’t)… “we all do better when we all do better.”

Mayor Jean Quan, in her inaugural address, asked Oaklanders to dream.  She said that Oakland is a city of dreams and asked each and every one of us to dream big and then take concrete steps towards seeing those dreams realized.  She asked us to reject the individual protectionism rooted in fear, and rather reach beyond ourselves to promote growth and healing towards our extended Oakland “family.” She suggested the following actions:

What are your dreams for our city? And what will you do to help see them realized?

I was hoping for some inspiration for my first post of 2010… a new year, and a new decade. But alas, the inspiration was elusive.

I thought maybe I’d come up with some top ten lists to share (because afterall, people love top ten lists), or simply some sage words… a mantra for our city and its people for the coming year(s), but nothing offered itself.

I decided to look back through photos I’ve compiled over the past few months, for something appropriate… something positive, something meaningful.  And I was struck by this message on a local church not far from my home… it fit the bill perfectly. 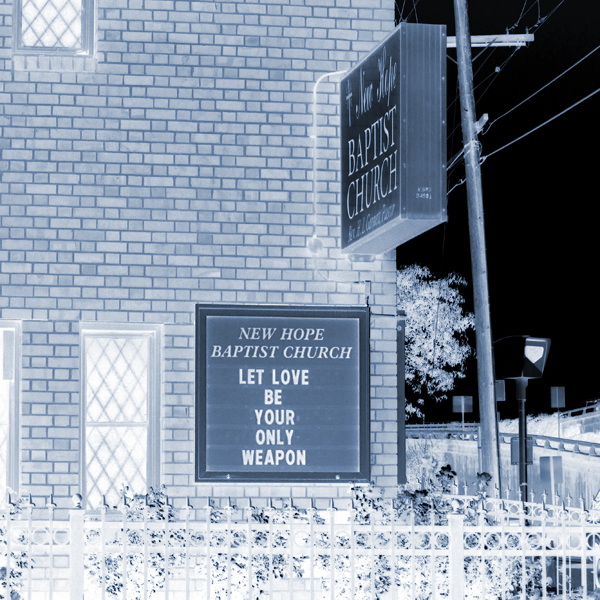 When I think back about the past year and the changes I’ve seen in this city I love, I’m aware of a plethora of positive developments, many of which I’ve tried to highlight with the creation of this blog. But I’m also nagged by the awareness that Oakland made headlines across the nation last year, not for the amazing revitalization projects underway in our uptown/downtown districts or the burgeoning and bridge-worthy art & restaurant scenes, but for the senseless murder of an unarmed man on New Year’s Day (Oscar Grant), and the subsequent killing of four police officers in March.

Oakland typically ranks in the top ten most dangerous cities in America; ranked number five in 2008/09 and number three in 2009/10 in the oft quoted annual editions of Kathleen O’Leary Morgan’s City Crime Rankings.  And though current statistics seem to indicate an overall drop in the crime rate for 2009 (Data: Oakland crime down 10 percent in 2009 by Kelly Rayburn), there’s no denying that there is still far too much crime in Oakland. I witness it personally in my corner of West Oakland… the sound of gunfire no longer fazing me as it once did. And that is a sad statement indeed.

I know it is a complex problem. We live in one of the most racially diverse cities in America. I see this diversity as an incredible asset… it’s one of the things I truly love about Oakland. But I am aware that with it, too, comes conflict, especially where social inequities exist… the result of failing families, failing schools, and more. It’s hard to blame some in my community for making a living selling crack, when they lack the skills or education for much else. But there’s no denying that this way of life brings violence and tragedy, not just to those immediately involved, but those nearby as well.

My hope for our great city is that as it grows into the 21st century, it will better serve all of its residents, not just those who can afford homes in exclusive neighborhoods or private educations for their children… gentrification no longer displacing those with the least means, but better development that benefits everyone. This may sound lofty or naive, but I believe it can happen. At least that is my hope. Because in a region rife with affluence, it’s amazing to me how many in our city have so little.