I’ve been a bit lax in posting this past week or so… I came down with a nasty cold/flu which has kept me moving at the pace of a three-toed sloth. Actually slower.

But the universe has an interesting way of providing when we need it most, and as a result, I’m excited to tell you that I’ve got a guest post coming up later this week. Please stay tuned.

In the meantime, here is a continuation of the focus on a cool multi-artist installation site in my local hood, with the foreground image below by street artist Ernest Doty. I’ve actually featured his work on this site before without realizing it (see Art Murmur is cool. And it’s tonight. which I now know includes one of his multi-eyed creatures, another regular theme in his work.)

I love this piece for its focus on the bird, more specifically a raven (at least that’s what it looks like to me).

I recently completed a small body of photographic artworks that, while focused on various themes and settings, all had one feature in common: birds. In the process of developing this body I did a bit of research for an accompanying essay and discovered that throughout history, images of birds have been used to symbolize the link between the spiritual realm and the physical world.

Just last week I read a short creative nonfiction work called The Raven by Barry Lopez. It’s an allegorical meditation on the differences between crows and ravens, but really its meaning is much deeper, exploring issues frequented in his works: the relationship of human culture to the physical landscape, identity, ethics, etc. Here is a short excerpt:

Finally there is this: one morning four ravens sat at the edge of the desert waiting for the sun to rise. They had been there all night and the dew was like beads of quicksilver on their wings. Their eyes were closed and they were as still as the cracks in the desert floor.

The wind came off the snow-capped peaks to the north and ruffled their breath feathers. Their talons arched in the white earth and they smoothed their wings with sleep, dark bills. At first light their bodies swelled and their eyes flashed purple. When the dew dried on their wings they lifted off from the desert floor and flew away in four directions. Crows would never have had the patience for this.

You can look up the PDF if you want to read the full piece (it’s quite short at just three pages). I found its beauty echoed in the imagery of this mural. 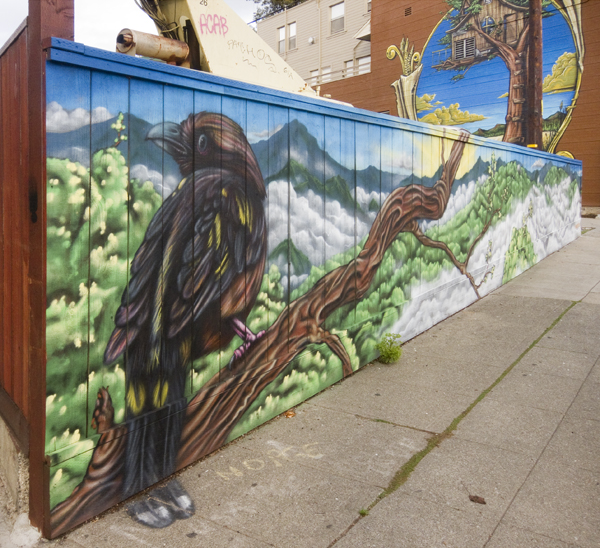 Many of Doty’s works incorporate bird imagery (see another below, from West Oakland) and since his Facebook profile describes him as “a mystic”, I have to believe he’s got some similar intent at work with this symbolism. Very cool. 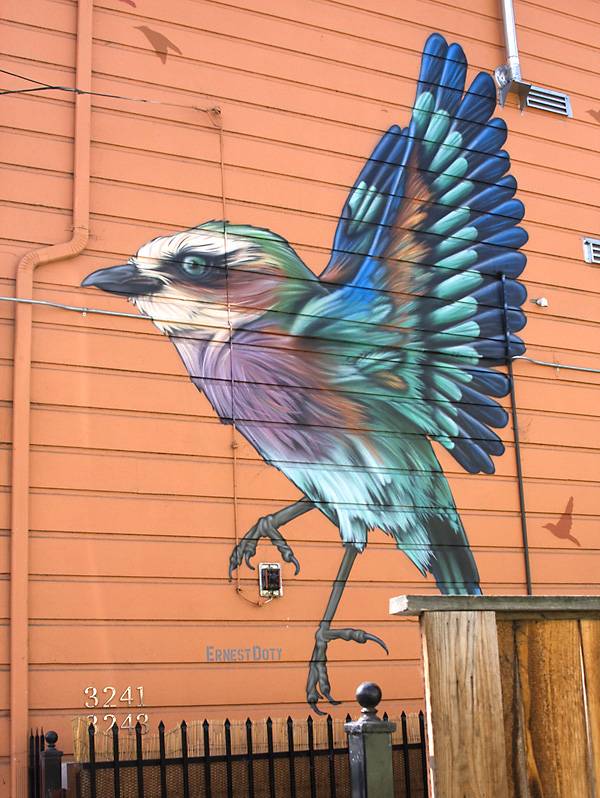