I quoted a writer the other day in my post about the Floral Depot building, who argued that its restaurant Flora was the “anchor” of the Uptown district, and I agreed. But now that I think about it, I realize that it’s truly the Paramount Theatre that grounds this neighborhood, and has for decades.

Before there was the Fox-reopened, before there was Lukas, before Van Kleefs, before Flora and the Uptown nightclub, before Art Murmur and its slew of hipster galleries, before the condos Jerry Brown envisioned (now realized), before all of this… the Paramount Theatre stood, proudly serving this neighborhood for decades despite the departure of nearly everything around it.

I’m wrapping up my Art Deco Days series… there’s much more to tell – I haven’t even covered the gorgeous I. Magnin building – but I’m itchin’ to move on to other topics, so I’ll finish up with a bit more about this Oaktown icon.

We left off in the expansive and extravagant “redwood forest” lobby designed by Timothy Pflueger.  Additional features included the Egyptian Princesses cast in plaster and painted in real gold-leaf (remember, this was the time of the discovery of King Tut’s tomb and the world was captivated by Egyptian art).  These lovelies may appear identical, but there are subtle difference between them, in the number of folds of fabric draped behind their legs.  Attention to minute details such as this can be found throughout the entire theater, designed to ensure the patron’s experience of true artisan craftsmanship, rather than cookie cutter repetition.

Pflueger was considered one of the foremost architects of the Art Deco style – and like another famous architect, Frank Lloyd Wright – he designed everything in this theater right down to each and every light fixture. It’s incredible. Though there are numerous influences (Egyptian, Greco-Roman, Polynesian), the same Deco styling is applied to all. And the same zig-zags, swirls, leaves, flowers, & vines can be seen throughout… on the walls in cast plaster, in the ceiling treatments of silver-fin metal work, in the carpeting, upholstery, and more. 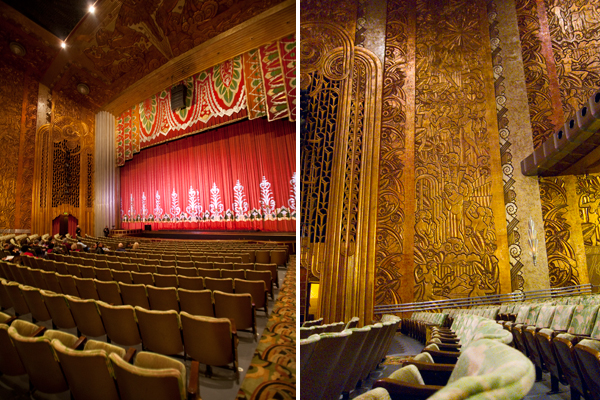 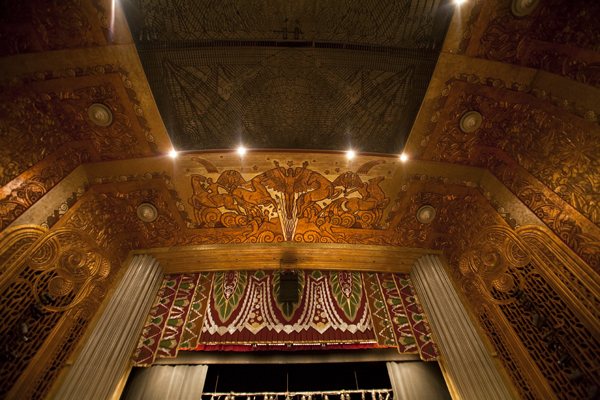 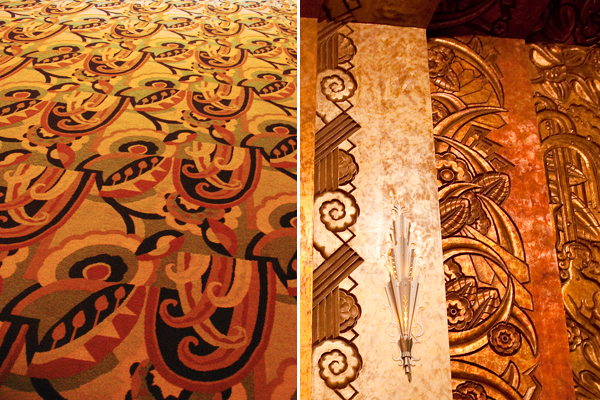 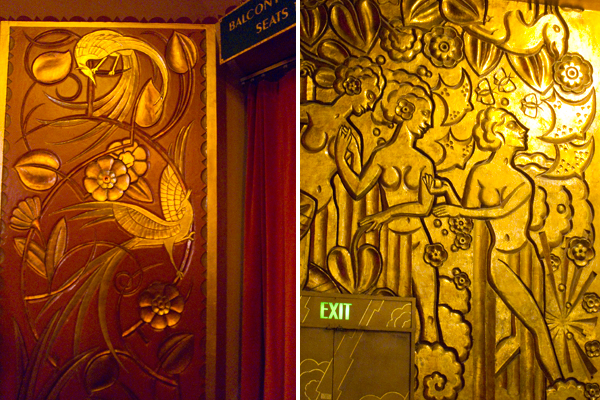 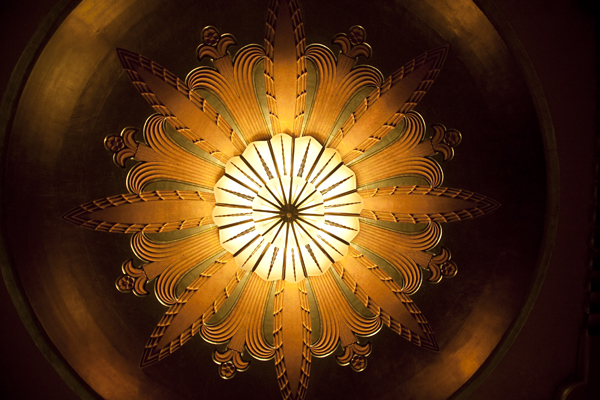 The theater continued to show movies through the 1930’s and beyond. During WWII, the Paramount became a favorite gathering place to watch news-reel updates on the war. In the 50’s, a thousand youngsters came to see Elvis Presley’s Jailhouse Rock. But as development moved to the suburbs and people were able to enjoy entertainment at home on their televisions, attendance at the Paramount declined. It was eventually closed in September 1970, to be later rescued by an unlikely candidate.

In the early 70’s the Oakland Symphony was looking for a new home and they considered both the Fox Oakland Theater and the Paramount. The story goes that the symphony was brought onto the stages of both theaters (both shuttered at the time) to determine which space had the best acoustics. The Paramount won hands down, and the Symphony later purchased the theater in 1972 for $1 million, cobbled together with some creative financing, including a 50% kickback from the seller.

The theater was completely restored to its original 1931 splendor by project manager and Art Deco expert Peter Botto with additional architectural firms consulting. Elements that were added mid-century, such as candy counters and popcorn machines, were removed; new seats were installed; the carpet was replaced (extreme care taken to exactly match the original carpet); and the entire theater received an intensive cleaning. Supposedly when the dust was blown out of the upper levels of the theater, the ground floor was filled waist-high with the debris. Years of smoking indoors also added thick layers of grime that needed to be carefully cleaned from all surfaces. The effort was not a renovation, but a complete restoration, our tour guides emphatically noting the difference. The complete restoration cost about $1 million dollars (the same price for which the theater was built in 1931). Compare that to the cost to renovate the Fox in the 21st century… a whopping $75 million, and you can understand why some folks thought the Fox would never again see its doors opened to the public.

I misspoke in one of my earlier posts on the Paramount, stating that it was still currently owned by the Oakland Symphony. Actually, the symphony went bankrupt just two years after purchasing and restoring their new home (oops!). But they made a deal with the City of Oakland, donating the theater to the city for the lump sum of one dollar, in exchange for an agreement that they’d be guaranteed 40 years of bookings. Pretty sweet deal, eh? The Paramount Theatre is now operated and managed by a small non-profit organization on behalf of the city. 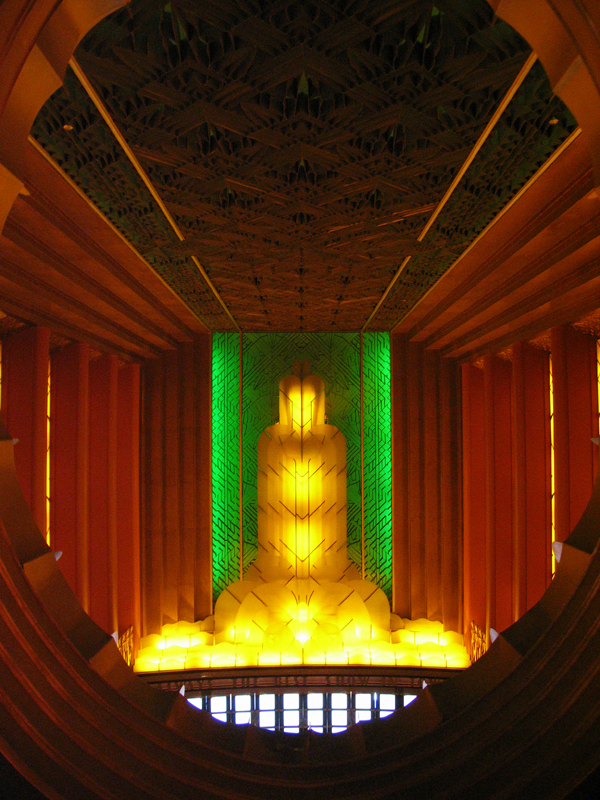 View of Lobby from Upstairs Balcony 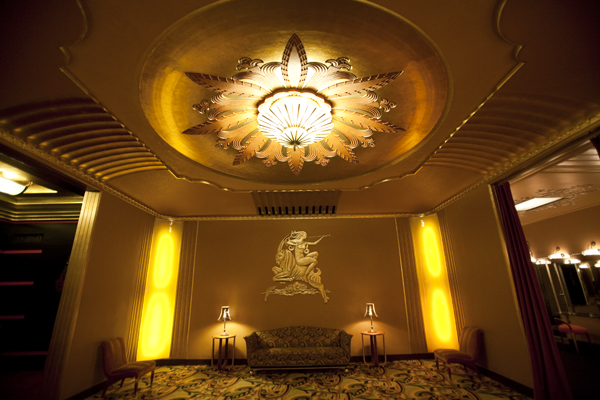 3 thoughts on “The Paramount Theatre ~ an Oakland Icon”