Here’s the first of what I hope to be fun and long-running series of how-to’s. I meant to do a bunch of these last year, the most recent being How To Make Your Own Elf Costume, but the end-of-year-holiday-craziness got the best of my good intentions.  Perhaps I’ll resurrect that one in about 10 months…

In the meantime, let’s make a stencil!

The cool thing about stencils is, once created, they can be used over and over again. This makes them a popular medium for street artists, but they can be used for all kinds of things from signage to interior décor.

The basics are this (we’ll flesh out the details further below):

Sounds easy right?  It can be, or it can be incredibly complicated, depending on the image (and number of colors) you want to work with… see Banksy image below for example on what we’ll NOT be doing. He’s amazing. 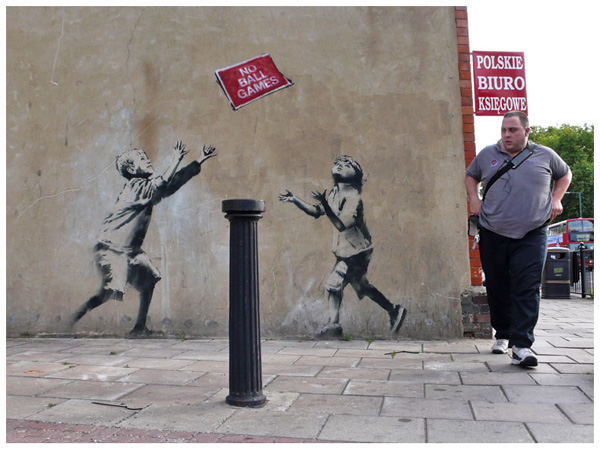 I’m going to start with something simple, really simple, since I’ve never done this before.

It’s also worth pointing out, before we get started, that it’s important to think about how you’re going to use your stencil and what your motives are, because this will inform the entire process from choosing your starting image, to the final steps of putting it out there in the universe (even if it’s just in your living room).

These, and many more, are good questions to ask yourself before you begin.  Having said that I’ll give you my answers…

I’m interested in the lack of nature in many urban spaces, particularly the absence of what I deem to be beautiful in especially blighted areas. Therefore, I’ve chosen an image of plants & flowers that I plan to place in especially blighted areas.  My hope is that people seeing it will think about what is beautiful (and ugly) in their surrounding environment and how they are affected, either positively or negatively.

So let’s get started…

1. Choose your image or design

There are lots of ways to go here and you can find inspiration from an infinite variety of sources (magazines, newspapers, billboards, stock photography, other artists’ works, your own imagination, etc.) The key is that the image should be able to be reduced to just two tones… black and white, or positive and negative space.  For hand drawings or simple two-tone graphic images, this is easy.  For full color photographs, it’s a bit trickier.

Probably the easiest way to reduce a complicated image is either on a photocopy machine (set to high contrast) or through Photoshop (there’s a great filter under Sketch called Stamp – you can dial in the light to dark ratio as well as the smoothness of your finished lines – see example below). 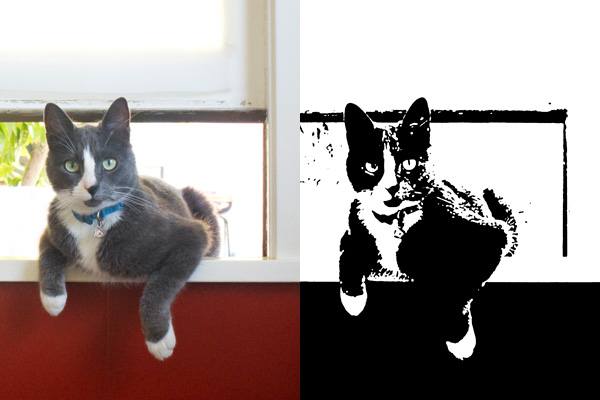 I’m going to be using a hand drawn image, inspired from another artist’s lithograph print that I have.

One other important point involves what are called “islands”.  Imagine you have a thick black letter “O” for example.  The interior of the O is completely surrounded by black (the part you cut away) and therefore the inside of the O would fall away too – so instead of a black O in your stencil, you’d just have a big black circle. The inside of the O is the island and you have to keep it in tact in your stencil by creating what are called “bridges.” See image below. 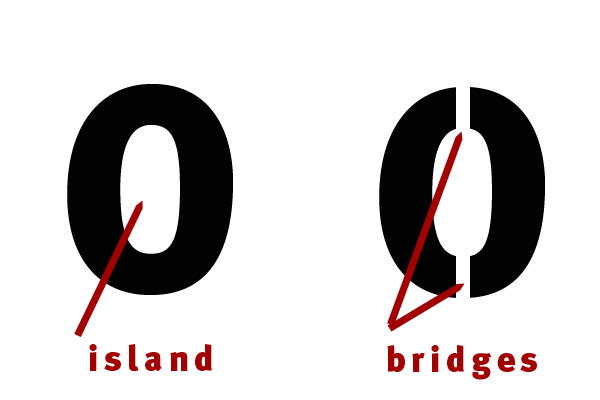 2. Cut image/design out of cardstock

You can use lots of different materials here for your basic template… probably the cheapest is basic cardstock.  But you can use acetate, manila folders, plastic stencil mats, posterboard, etc.  You’ll need to get your image onto the stock so you can cut it out.  You can either spray mount it on, tape it on, draw it on, or if you are using acetate or something similar, place your image underneath.

Now the tricky part… the cutting.  Use a sharp Exacto knife and have extra blades available.  There’s really no other way to do it, and the sharpest blade makes the job easier. Be sure you have something underneath you so you don’t end up stenciling your kitchen table inadvertently! Here is a shot of me cutting out my stencil… 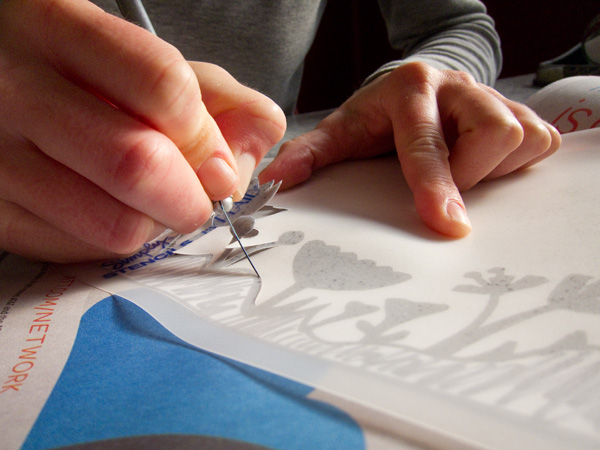 Don’t fret if you mess up (I almost forgot to add a bridge), as you can fix most mistakes with a little tape and ingenuity.  And those you can’t fix, well… no one else will know but you!

I’m going to be painting mine onto paper (that maybe I’ll wheatpaste up later), because I have no interest in going to jail or being fined lots of money.  As Get Up said in my interview with him, “It’s always best to avoid jail.”

There are other factors to consider as well, some of which I wrote about in There are laws about these things… Another graffiti artist (One Leg Out) has a code of ethics which includes:

Having said all that, the key to a successful stencil print is getting your stencil flat and well adhered to whatever surface you’re applying it to.  Use tape or spray adhesive, and mask off the area around the stencil with paper to avoid overspray.

When ready to spray, hold the can approximately 9″ away and with a sweeping back and forth motion, use a light spray.  If you use too much paint, or hold the spray in one place for too long,  your image will likely suffer from “bleeding.”

One final note: An alternative to using spray paint (which is typically quite toxic, both to the environment and to one’s self) is to use a large brush and dab the stencil with a water-based paint.  Or a roller can work too.  In fact some artists use rollers with chalk to great effect.  It’s temporary and totally environmentally safe.

I went with the toxic stuff because I just happen to have a bunch of it in pretty colors collecting dust in my garage.  Below is my first test print… I had a little fuzziness where the stencil wasn’t perfectly adhered, and then my paper ripped where it was too adhered.  But hey, that’s what tests are for! 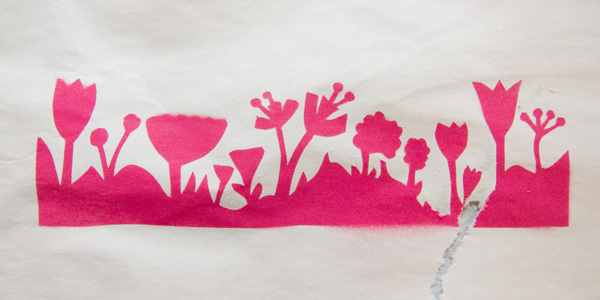 4 thoughts on “HOW TO: Make a Stencil”