I mentioned in yesterday that new galleries were springing up in Oaktown like mushrooms. Today’s post is about one of these… Vessel Gallery.

Though new to Oaktown – they literally just opened and their big gala opening reception is this Saturday – this gallery was previously located in Berkeley, established in 2004. Which makes sense. Because it doesn’t feel like a newbie start-up…

For one thing, their space is huge. Contrast this with next door neighbor FM gallery (also new, or at least new to me) which has several artist workstations and a gallery all squeezed into one narrow story, and it seems positively gargantuan.

Housed in an old livery (there are several of these in the East Bay including one near me on San Pablo, which forced me many years ago to look up the term – it means a stable where horses and vehicles are cared for or rented out for pay – picture horse-drawn carriages running up and down Telegraph), the building dates to 1906 when the “Joseph E. Silva Livery Stable cared for, boarded, and transferred Oakland Fire Department horses at this location.”

Owners Matt and Diane Iglehart worked with architects and designers to renovate the building specifically for use as an art gallery, while maintaining some of the interesting historical details, like the original floors (see below).

A small gallery space greets visitors on the ground floor, but upstairs is a different story. The second floor is expansive, and each piece of art is given lots of breathing room. Additionally, instead of packing several artists’ works into their space, they focused primarily on just one artist, whose pieces filled both floors. It was a somewhat refreshing viewing experience, almost restful compared to the chaos of smaller more eclectic galleries.

The current exhibit is titled “A Place In-Between” and features sculptures and drawings by Cyrus Tilton, and jewelry by Eric Silva. Silva’s pieces occupy a display case upstairs and were not easy to document so you’ll have to go see for yourself. And you should, because these one of a kind pieces are quite stunning. He works from found, recycled, or reused materials, fashioning them into “wearable sculpture”.

Pictured below are just two of the works of Cyrus Tilton.  As I mentioned previously, his works dominate the exhibit occupying both floors of the gallery.  His body of work is extremely cohesive, sculptures upstairs echoing the drawings that are first encountered downstairs.

Many of the pieces seem to be about the complexity and changeability of identity and persona, and incorporate interactivity to convey these ideas.  For example, the arms of the figure (below right) are movable and if patrons aren’t too afraid to actually touch the art, you can spin different “masks” into place.

Another piece that seemed quite popular had a figure sitting on a chair, with something akin to a small paddle-wheel for a head.  Each “paddle” had a painted head in some configuration, and the whole wheel had a crank attached to it… if you spun the hand crank, the rotating paddles would create a small motion picture of a head gyrating, in seeming agony.  It was slightly disturbing, but incredibly captivating. 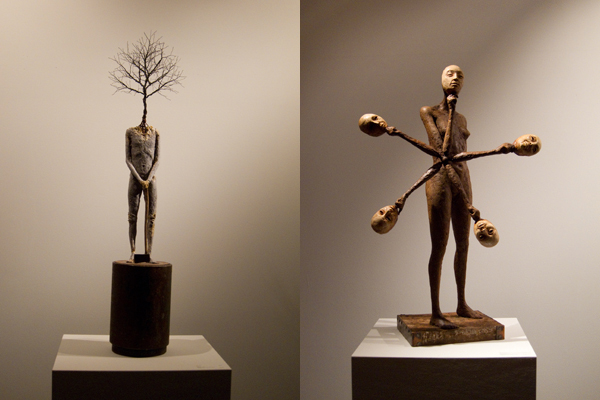 The title of the exhibit comes from Tilton’s artist statement:

This body of work is a contemplation, an effort to be present on the journey and to acknowledge the path, the obstacles, and the place in-between.

I encourage folks to check out their opening this weekend. There’ll be music and wine (of course!), and a portion of all proceeds benefit local charity First Place for Youth.