Tonight the Obamas presided over the National tree lighting ceremony in Washington D.C.

Here’s how we did it, Oaktown style….

And if this doesn’t get you in the mood, I don’t know what will.

There were elves performing magic tricks that astounded! 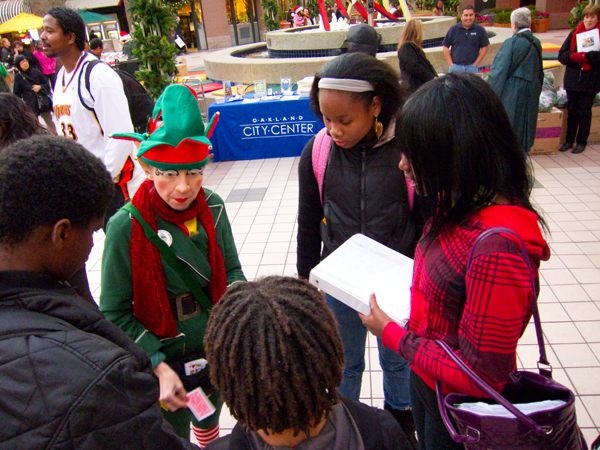 The Oakland Jazz Workshop performed some lively numbers, especially with the accompaniment of this young talent… the girl had some pipes. And she was only ten! (And ten months). 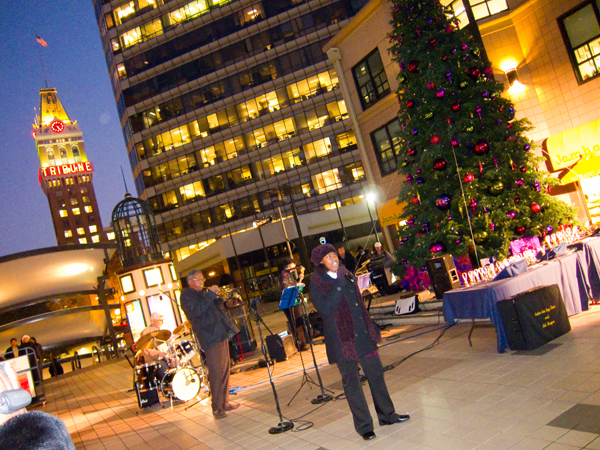 Of course, Santa was there!

And after the lighting of the tree, the Oakland Interfaith Gospel Choir came out to really kick things into high gear. Fantastic. And if you missed this performance, you can catch them this Saturday night, December 5th at the lovely Paramount Theatre, 7:30pm.

You feelin’ it yet?

That holiday spirit I mean.

I thought I kicked things off pretty well yesterday, and I’m going to keep the energy flowing… or at least I’m going to try.

I thought it would be fun to document some of the more spectacular holiday light displays around town and decided to start at one of my very favorite places in Oakland, Mountain View Cemetery. Their display is a little kitschy, but that’s kind of what it’s all about isn’t it?

I saw them unpacking the lights and wrapping the trees last weekend when I was there for a jog… young men on step ladders stringing trees, and others placing Santa and his reindeer in their arc around the entrance fountain.

The sign says the “Circle of Lights” display will be up each evening in December from 5 – 9pm. There’s even accompanying holiday music if you tune into the FM station listed. All I can say is I was there at 5:05pm today, and while a few things were lit, the reverential circle was certainly not. Bah humbug. Here are a couple shots, but clearly I’ll have to go back… 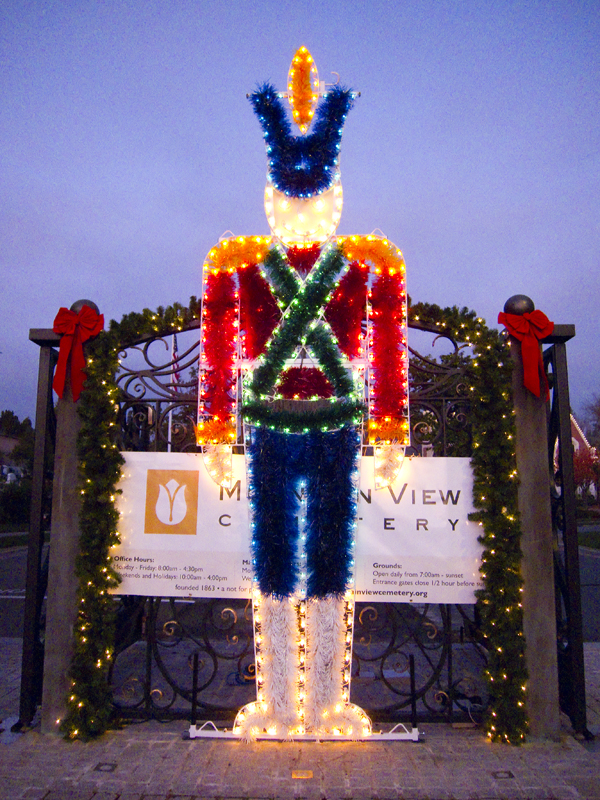 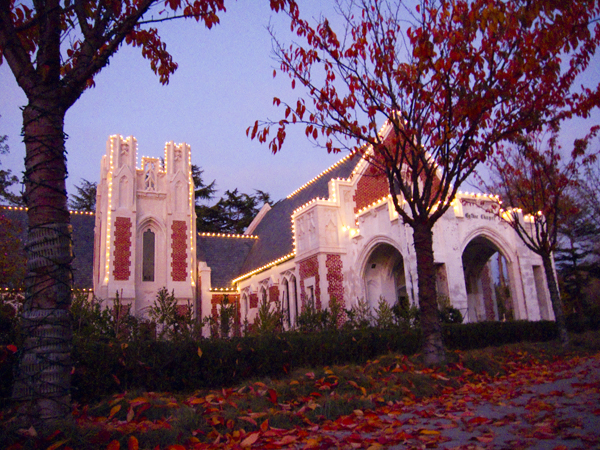 Keep tuning in for more holiday cheer, unless you’re feeling Scroogey of course… because I’ve got lots of joy to spread around. I’m hoping to make it to:

Plus I’ve got snowflake how-to’s, cookie recipes, Santacon!!, and who knows what else. Let’s have some fun, eh?

Oh yeah… and Art Murmur is Friday! So I’ll cover some non-holiday stuff too for you Grinchy types.

Ok. So it’s December. Can you believe it?!

In fact, you might as well embrace it. Christmas is here. And Hanukkah. And Kwanzaa. And the trees. And the lights. And the sales. And the sweets. And all that holiday cheer. Go on, embrace it. Would you rather be a Grinch?

I wasn’t sure what I was going to feature today. Especially since I just got a nice little write up in Oakland Magazine… thanks OM! It’s been a bit hectic and I haven’t had as much time to devote recently, so I’ve been wingin’ it a little bit. Which can have its own special benefits, but can also be quite challenging.

Tonight, the first thing I came across was in kind of a sketchy neighborhood near me in West Oakland… I wouldn’t usually get out and walk around here, but on the corner of 31st and MLK I saw a guy setting up an alter outside a corner liquor store. It looked pretty elaborate with words written out across the sidewalk in candles and it reminded me of the beautiful altars at the Day of the Dead festival.

I grabbed my camera and got out and asked him what he was doing. He said he was trying to light the candles. I asked if it was art. And he said, “Nah. It’s more like a remembrance for someone who died here the other night.” I said, “A memorial.” And he said, “Yeah.” We said a few more things. It was sad. But his effort at creating something to be experienced and shared was beautiful. And it was art, even if he didn’t know it. It said “R I P Miller.” I decided not to take a picture.

Then, talk about a 180, I came upon this… it’s a Frosty the Snowman merry-go-round inside an igloo ball. Fantastic. And horrible. All at the same time.

I decided this didn’t quite capture the essence of holiday spirit I was seeking… I made my way towards Jack London square. On the way I passed the gorgeous Tribune Tower framed by the full moon. I love this building. I thought about buying it in 2006 when it was for sale, but they were asking 12 million dollars for it… just a little bit out of my price range. It actually went for over 15, but that was 2006. Wonder if they’re appealing the assessor’s office for a reassessment… ahem.

At Jack London I was hoping to see the giant xmas tree from years past with huge ornaments like mirrored basketballs reflecting back one’s glee. But it wasn’t there. In its place was a stand of geometrically arranged palm trees with green electric disco lights shooting up the trunks in coordinated choreography. I guess that’s progress, eh?

That didn’t quite get me either so I made my way across the street and snapped a couple shots at the Home of Chicken and Waffles on the corner of Broadway and Embarcadero. I love that place. If you haven’t been, you should check it out.  They have a pretty fantastic little art display inside, in addition to the delicious chicken and waffles, real southern style. I love that Santa’s got a chicken leg… 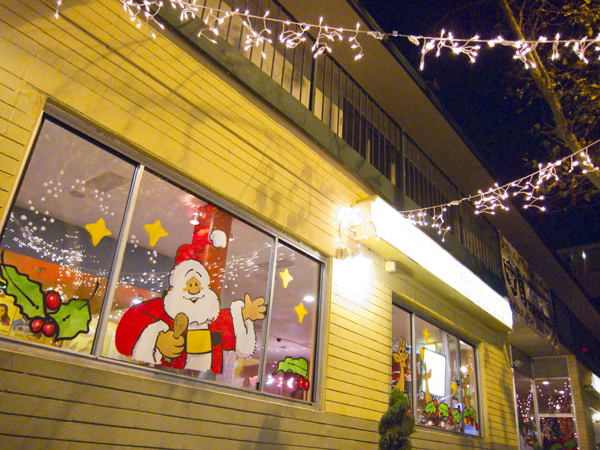 Don’t be fooled by the empty barstools… it’s kind of a late nite joint. 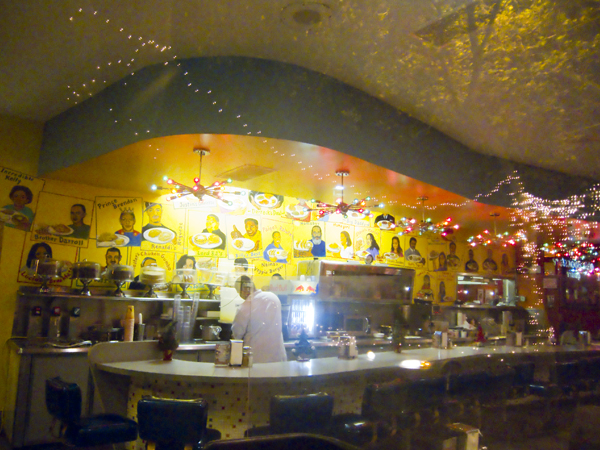 On my way back home I spotted this new? restaurant out of the corner of my eye with a decidedly more elegant display. It’s Mimosa Champagne Lounge and they’ve actually been open for about a year now… guess I’ll have to check them out. They make Christmas look real classy.

And as I made the home stretch I passed this display…

Even in the ghetto, folks put in the effort to make things a little special during the holidays. It’s a ritual that crosses cultural boundaries, economic boundaries, etc. And it’s a kind of art. And it brings us all just a bit closer together.