So I spent a good chunk of my Saturday meandering around Lake Merritt and the Grand/Lake area… I started at the Farmers Market which is simply awesome and definitely one of my favorite things about Oakland.  It’s a wonderful combination of fresh farm produce & flowers, prepared foods, artisan goods, live music, and more.  They even have a stand with massage therapists & tables ready to ease any remaining work-week stress right out of you!  I made my way to the food court where a great lo-fi funk band was playing… I think they were called Sprocket (not sure about this though).  Check out these little tykes… they were totally groovin’! 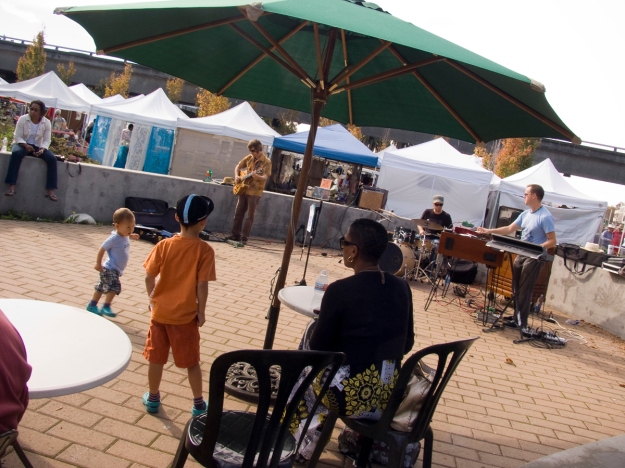 Then I pedaled around the lake… and at 11:45am sharp, the bell tower of The Lady of the Lourdes church (featured last week) started chiming what I believe is a portion of one of Beethoven’s symphonies… it played for several minutes, which I honestly had never heard before. Pretty cool.

As I rounded the next corner, I came upon a group of about 50 people on a lawn section adjacent to the lake, doing the Thriller dance.  Yes, Michael Jackson’s Thriller.  They were doing it without the music, but anyone who knows the video (is there anyone who doesn’t?) knows this dance!  A group of random passerbys (myself included) stopped to gawk and laugh.  It was quite hilarious.

What I’ve since learned, is that this group (and others) are preparing for an attempt at the Guinness World Record for the largest simultaneous worldwide dance to Thriller on October 24th (called Thrill the World).  It’s just a week away folks, so if you want to get in on this ridiculous fun and dress up like a zombie and get down with the funky grooves, there’s one last rehearsal scheduled for this Thursday, October 22nd.  Click here for full rehearsal schedule as well as a link to practice the dance at home.  How can you not love this???

After leaving the zombies-in-training, I parked my bike and spent a lovely time strolling through The Gardens at Lake Merritt. It’s amazing how many people cruise the lake every day – bicycling, pushing their strollers, running their dogs – but how few people know of this gem. Located on the north side of the lake within Lakeside Park, the gardens are comprised of a seven-acre collection of themed gardens. I’ll have more info on this in the next couple of days, and will be focused most of this week on all the cool things that are happening around Lake Merritt. It’s really the heart of our city.