Did you know there’s a marathon in Oakland this weekend?!? It seems like big news, as this is the first marathon being held in our city in over 25 years, but I’m surprised by how many people have no idea this is happening.

There was a great article in the East Bay Express about this history of this event (and other marathons) called Can Oakland Go the Distance? by Dan Schoenholz.

“Long time Oakland runners and race organizers… see the Oakland Running Festival as an opportunity to promote both Oakland and running, and as a way to unify a community that is often divided by racial, economic, and geographic differences.  Marathons are big events in many cities – New York and Boston, famously, but also Baltimore, Cincinnati, Houston, and countless others – and serve as a source of civic pride and unity.  Why not Oakland?”

The festival is based on a more modern, all-inclusive model, not just for hardcore athletes, but one in which a variety of races are provided so that folks can participate at any level they choose.  It’s designed to be runner-friendly, walker-friendly, family-friendly, and most definitely, celebratory. There’s the marathon (26 miles!), half-marathon, a 5k, a kids fun run (two age categories & distances), and a four-person relay.

Strikingly different from the marathon course run in 1981 which was fast, flat, and through heavy industrial areas, this year’s course is designed to be scenic and show people what “Oakland has to offer.” The course starts at City Hall… the first high-rise government building in the U.S. and the tallest building West of the Mississippi at the time it was built.  Runners then progress through the newly redeveloped Uptown section through to Temescal, and Rockridge.  Then the route parallels the BART tracks heading up Keith & Broadway to Lake Temescal Park, and continues through the lovely hills of Montclair before entering the Dimond  District to head back down towards the flats.  Runners will then head down Fruitvale Avenue into the melting-pot district of Fruitvale, and continue along International Boulevard through the Arts district of Jingletown, and on to Jack London Square.  Tired yet? There’s still much more.  After Jack London, runners will pass the West Oakland BART station and through West Oakland, rich with African-American history.  Then they’ll make their way up the lovely redeveloped greenway of the Mandela Parkway, just up to the border of Emeryville, where they’ll hang a right and head through my neighborhood of Ghosttown.  This is so cool! They’re almost in the home stretch.  Then on to 27th Street to hit Lake Merritt and make their way almost the full circumference around, branching off at 19th street to head back to City Hall… the finish line!

Here’s a link to the marathon map, and another link for the half-marathon map.

Here’s the schedule of various events:

I know I’ll be out both days.  While picking up my Press Pass this morning I nearly bumped into the Mayor, the downtown unbelievably abuzz with activity.  This weekend is a great moment to show the world what a beautiful and vibrant city Oakland truly is.

Please come out to support the runners and support our city! 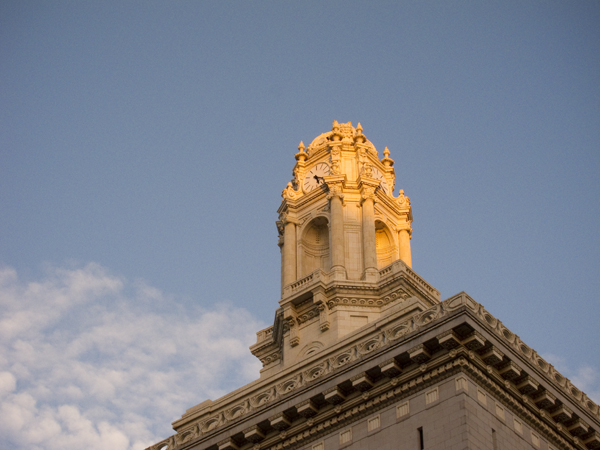 Oakland Marathon a step in the right direction by Chip Johnson