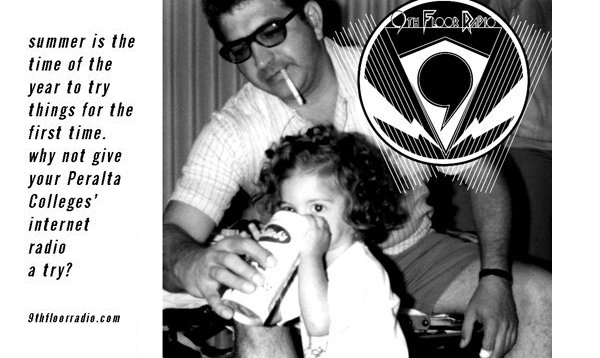 Hey Peeps… here come’s my second ever guest post. Mark Mason has picked up the slack I’ve let gather in a wake of meetings, deadlines, to-do lists, and spreadsheets.  Thank you Mark.  And thanks to the fabulous folks at 9th Floor Radio for pitching the idea. As you all likely know by now I’m a bit of a music freak and a big fan of all things eclectic, interesting, and alternative (which no longer means what it used to). 9th Floor Radio fits the bill with 20+ shows that cater to musiphiles of all stripes, and all of it’s immediately downloadable.  I’m listening to an archive of Straight from the Crate as I put this together and I gotta say… it’s pretty damn sweet (because I’m old and I love those old school grooves). But enough of me, here’s Mark’s great writeup…

Radio is dead. Ok, you can still turn the dial and get a crackle and hiss followed by music and chat. But is that really what you want? How many times have you been in your car or at home and tried in vain to find a station which appeals to your sense of restless discovery, only to be confronted with a commercial soaked station full of predictable programming? It’s frustrating.

This is where the internet has breathed new life into the tired old format of radio. Instead of a DJ stifled by advertising commitments you now have the power back in the hands of music lovers.

One such station is 9th Floor Radio, an internet radio station located in Oakland, California. The station, originally broadcasting from the ninth floor of the Laney College administration building, hence the name, has a formidable roster of shows. From the soulful melodic grooves of Her Blue Majesty, the punk, metal and primitive heavy rock of Kick Out the James to the Nu Jazz, Neo Soul and Funk of Jazzology-Remixed, no one need feel left out. All shows are archived at www.9thfloorradio.com, ready for listeners to download and listen at their leisure.

A show which could be said to embody the spirit of the station and boasts of “always playing the darker weirder and louder side of Rock n Roll” is Dr. Feelbad. The Doctor, otherwise known as Ian Spangler, plays anything from The Melvins and Boris to interviews with the serial killer Ted Bundy– a provocative mix for sure.

When asked why 9th Floor Radio is important he says, “As I enter the booth I’m reminded of my relationship to music. I have some of the strangest, saddest, heaviest, and scariest records anyone ever had the pleasure of owning. I like to use my show as a big ‘go to hell’ to those who believe music is either unimportant or purely to be consumed at their convenience, and the good folks at 9th Floor make it possible for me to do just that.”

And it’s not just the diversity of the station which makes 9th Floor important. With the love of music and freedom of expression at the center, there comes a sense of community. The Doctor agrees, citing station manager Melissa Dale as a major factor for the success of the station:

I can’t say enough about all the work Melissa and her army of technicians do to give validation and exposure to those of us who are obsessed with sounds and music. There are more than 20 shows on 9th Floor, not to mention the television shows that keep us all looking like we know what we’re doing. Shows like Straight from the Crate and Electric Velvet Sound remind us that there’s plenty of older music we’ve never heard before. While shows like The Missing Box and 9thUBRadio help us breathe easy knowing there are plenty of thoughts we have yet to think. All of this is delivered to you commercial free, thanks to Melissa’s devotion to making sure the almighty dollar won’t poison the intentions of all involved.

It is exactly this kind of heartfelt enthusiasm, the very lifeblood of the station, that will sustain and grow it stronger in the years to come.

Mark Mason is a writer from Oakland, California. He has recently completed work on his debut novel, for which he is seeking representation. For a sample of Mark’s work go to http://doobler.hubpages.com 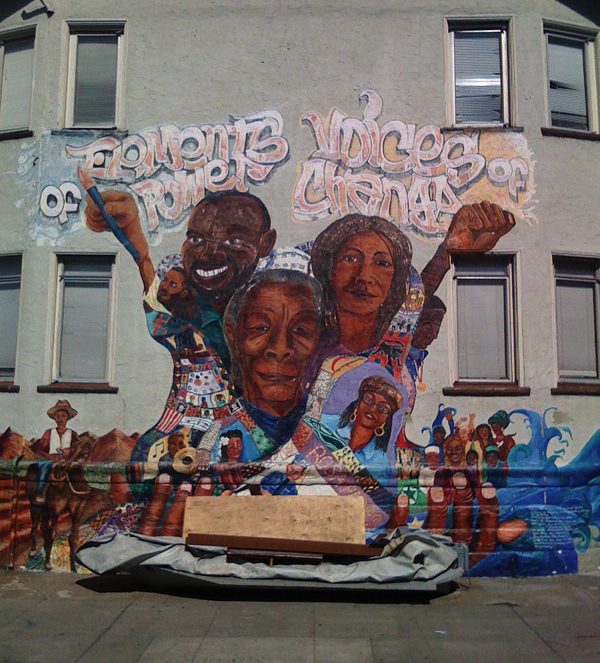 I love this mural, despite its dilapidated state. Painted 10 years ago by folks from Laney College, the East Bay Institute of Urban Arts, and Pat McElroy on the corner of 31st and MLK, it’s definitely showing its years, not to mention the heap of dump-destined-junk dumped in front of it. I thought about going back to snap another shot without the pile of junk, but then decided it was more authentic to just show you how I saw it when I first came across it.

This is typical in West Oakland, and the symbolism does not escape me.

Here you have symbols of power and change for people of color – activists, political leaders, artists, musicians, migrant workers, athletes, and more – all stitched together into a positive tapestry of, dare I say, “hope”, and some thoughtless person obscures it with a bunch of trash they’re too lazy or cheap to dispose of properly. It makes me mad. Trash gets dumped here daily, and I don’t just mean kids throwing their candy wrappers on the sidewalk as they walk home from school (which also happens). I mean large trucks advertising dumping & hauling, who likely charge folks to take their trash away, and then come dump it in my neighborhood so they don’t have to pay the city dump fees. Argh. The city still ends up paying for it, through blight clean up crews, and even more so, reduced property taxes.

It sometimes feels like a losing battle… which reminds me of this essay I read yesterday. It’s a breakup letter to the city of Oakland, from a resident who, after many years of struggling to make this city a better place, has given up. She’s movin’ to the country. Check it out… Ode to Oakland.

Directed by: Edythe Boone and Meera Desai (if that name rings a bell it’s because she was also involved in the Martin Luther King Jr. mural I covered when I first started this blog – To Ignore Evil…)

This one speaks for itself… simply gorgeous!  Located on Claremont Avenue under the 24 Freeway. 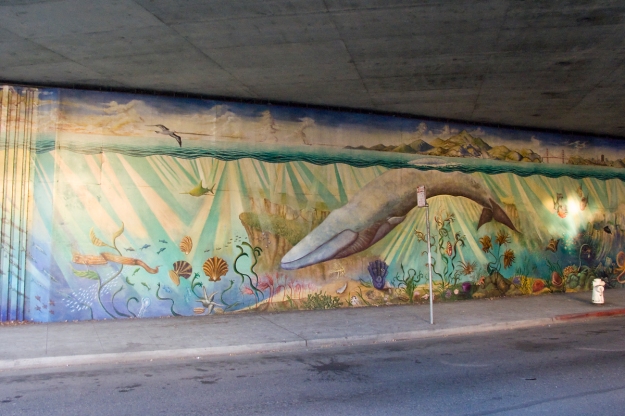 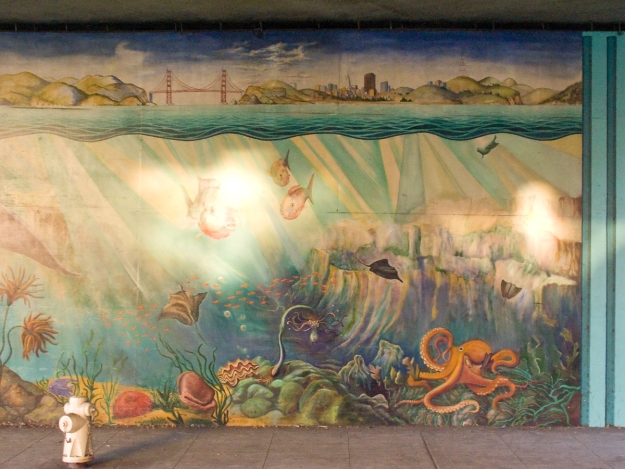 I love the fact that this is a representation of our immediate surroundings… see the Golden Gate Bridge, downtown San Francisco, and Mt. Tamalpais in the background. But most of the mural depicts that which we cannot see. I wonder if the bay really looked this alive in 1977… I wonder how it looks now…