I love this mural, despite its dilapidated state. Painted 10 years ago by folks from Laney College, the East Bay Institute of Urban Arts, and Pat McElroy on the corner of 31st and MLK, it’s definitely showing its years, not to mention the heap of dump-destined-junk dumped in front of it. I thought about going back to snap another shot without the pile of junk, but then decided it was more authentic to just show you how I saw it when I first came across it.

This is typical in West Oakland, and the symbolism does not escape me.

Here you have symbols of power and change for people of color – activists, political leaders, artists, musicians, migrant workers, athletes, and more – all stitched together into a positive tapestry of, dare I say, “hope”, and some thoughtless person obscures it with a bunch of trash they’re too lazy or cheap to dispose of properly. It makes me mad. Trash gets dumped here daily, and I don’t just mean kids throwing their candy wrappers on the sidewalk as they walk home from school (which also happens). I mean large trucks advertising dumping & hauling, who likely charge folks to take their trash away, and then come dump it in my neighborhood so they don’t have to pay the city dump fees. Argh. The city still ends up paying for it, through blight clean up crews, and even more so, reduced property taxes.

It sometimes feels like a losing battle… which reminds me of this essay I read yesterday. It’s a breakup letter to the city of Oakland, from a resident who, after many years of struggling to make this city a better place, has given up. She’s movin’ to the country. Check it out… Ode to Oakland. 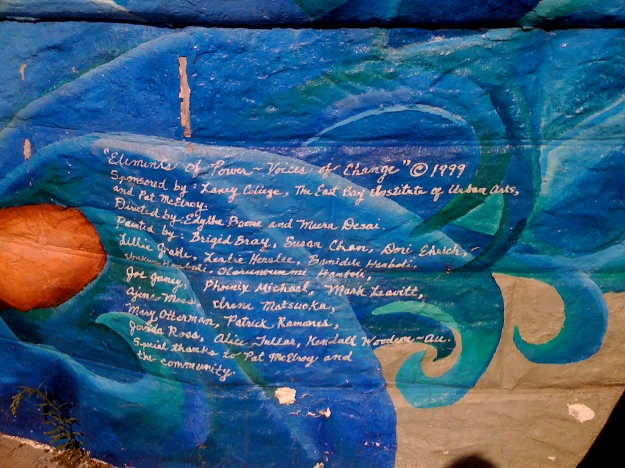 Directed by: Edythe Boone and Meera Desai (if that name rings a bell it’s because she was also involved in the Martin Luther King Jr. mural I covered when I first started this blog – To Ignore Evil…)