The traditional Aztec dancers from the Día de los Muertos festival reminded me of this mural I saw a few weeks ago with its blend of cultural imagery, including what appear to be various gods or goddesses.

It’s on an old boarded-up apartment building at the corner of 28th Street and Martin Luther King Jr. Drive. I wasn’t able to locate any artists’ signatures, but I did discover that the writing running along the top of the mural, which spans two sides of the building, says “May Peace Prevail on Earth” in several different languages. How beautiful is that? And how beautiful is this mural?!! The artistry is amazing.

The circle of black, red, and white above reminds me of some of the art I saw at the Museum of Anthropology at UBC in Vancouver, much of its collection focused on the art of the native peoples of the northwest coast. The figure of the raven is featured predominantly… legend has it that the first men were born out of a clamshell overseen by the raven (A Haida legend of the Raven and the First Men).

I wish I knew who the figure below surrounded by flames represents. Please send me some info if you happen to know.

I also love the incorporation of modern comic book characters (explorers above & warriors below) in between the dieties. 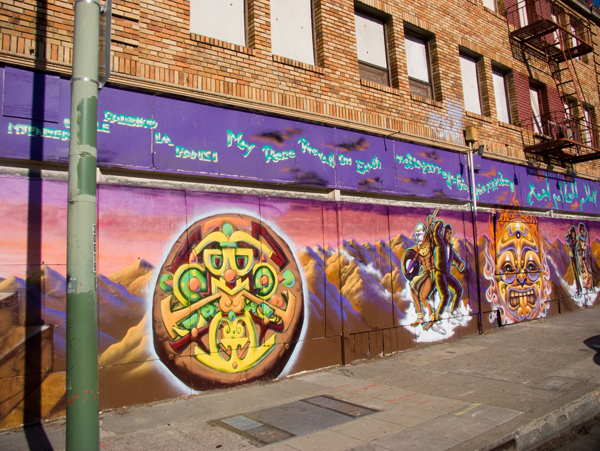 This last one looks Tibetan to me… but I really do not know. Anyone?

Note: later learned this to be another work by the folks at Community Rejuvenation Project.